A brief history of Athy

Athy owes it’s ancient importance to the fact that it commanded an important ford across the River Barrow. Frequent battles were faught for command of this ford. In the 2nd century King Aodh of Munster fell at the ford hence the name Ath Aoi or Ford of Aodh. Rheban, a rural area of Athy was marked on Ptolomy’s Map in the 2nd century. The town as we know it today appears to have originated in the thirteenth century.

Athy Parish was once part of the old diocese of Glendalough which was joined to Dublin in 1214. The Dominican Order was founded in Athy in 1253. The Dominican’s came about 70 years after the Norman’s built Woodstock Castle. They were one of two religious orders serving the town and district. The other order being the Crouched Friars, or Friars of the Holy Cross, who left Athy in 1575. St. John’s Cemetery, in St. John’s Lane, was originally their burial Ground. This Cemetery later became a non Catholic Cemetery. However the Dominicans are the only remaining order of Priests. They have assisted diocesan clergy in serving the pastoral needs of the town since their foundation. However there was a spell during the Penal Laws when the Dominicans were burned out of the town. At a later short stage in Parish History the Dominicans had to operate without any Diocesan clergy. The Athy Parish was constituted in 1670.

The Dominican Church was located on Dominican Lane, running parallel to Duke St., on the west bank of the Barrow. More information is available here. That Church, St. Dominics was opened in 1965, however as noted above the Order of Preachers have had a presence in Athy since the 1200’s.

As you enter Athy on the Dublin Road, you will find “the Crucin”, the ruins of an old Church in the old St. Michael’s Cemetery. It was probably built in 14th Century and is believed to be the original St. Michael’s Church. The graveyard surrounding it was been used from the remotest times and is said to be the burial ground of the soldiers who died in the battle of Ardscull, which took place when Robert the Bruce plundered Athy in 1315.

In the 1798 rebellion the Catholic Church was burned down. It was a long thatched building situated on the northern end of Meeting Lane between Leinster St. and Mount St. Mary’s, the side street was known as Chapel Lane. It most likely ran from near Telford’s Yard to the back of the current curate’s houses.

A site for a new church was found 100 yards from the Old Chapel and construction was underway by 1803. The church built was cruciform in style with three galleries (See photo under Churches in Athy). The first ever mission in Ireland was held in this newly built Church in 1842.

It is known that the Parish Priest moved from his home in Prusselstown to the currently used Parochial House in 1825.

The final Mass was celebrated in Old St. Michael’s Church on 24th September 1960, on the Feast of Our Lady of Mercy. On Thursday 29th September 1960, the Feast of St. Michael, the ceremony of cutting the sod was performed for the existing St. Michael’s Parish Church on the site of the Old St. Michael’s, which was demolished. A temporary wooden structure was used until the opening of the New Church. The architects responsible for the new building were O’Connor & Aylward, Pembrock St. The church was built on 10 – 12 ft of foundations which contained 3,000 ton of cement, sand and gravel, plus 100 ton of steel reinforcements. Over half a million bricks were used in the construction. The external brick came from County Cavan, the internal ones from Courtown, Co. Wexford. Portland stone from Dorset, England was used for the building of the piers and columns.

The church was originally designed to seat 1,200 people, although some of the mahogany seating was removed when the altar are was extended in 2001 and now seat 900 people approx. The glass in the transepts and nave, containing a series of symbols and emblems is hand made. There is a distinctive rose window above the main door. The altar rails are made from Carrara marble.

The original mosaic over the main door is was a copy of the famous fresco by Leonard de Vinci, and was the work of Irish mosaic Ltd., Roscommon. It was damaged in the 2010 fire and has since been replaced. The bells in St. Michael’s are Schulmerick Bells. During the building of the church approximately forty men were employed each week. Cost of the building was £175,000. The fundraising had commenced in 1952 and £100,000 had been collected when the construction began.

The New Parish Church was officially opened on 19th April 1964 by Most Rev. J.C. McQuaid, who was Archbishop of Dublin at the time. He dedicated it to our patron, St. Michael.

In the past Barrowhouse was a Parish of it’s own and was called Tankardstown Parish. The ruin of the Parish church are in Tankardstown cemetery. The Church was possibly destroyed in 1798, during or shortly after the rebellion. The current church, St. Mary’s Chapel of Ease was built in the 1820’s. Work commenced in 1822 and by 1829, the year of Catholic Emancipation, the Church was in use. The building itself is a smaller version of the pre-1960’s St. Michael’s Church. It is cruciform in design. Peter McEvoy, who lived near Kilmoroney Cross, Barrowhouse, was both architect and builder. Much of the work was executed by volunteers. In 1961 the Church was re slated with blue slates from the old St. Michael’s church which had been demolished to make way for the building of current red brick Parish Church. St. Mary’s Chapel of Ease was also repainted and decorated at that time. 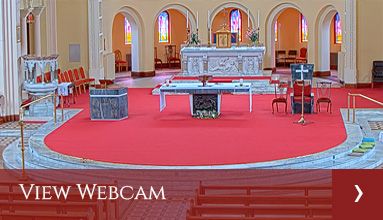 The Beatitudes are in the life of Jesus himself, and, in turn they tell the followers what makes for true happiness. blessed are they who are poor in spirit, gentle, hungry and thirsty for justice, merciful, pure in heart, peacemaking, suffering for Christ. 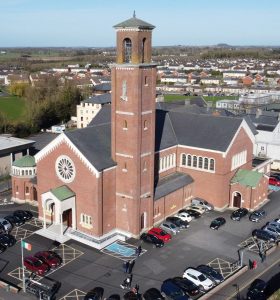